Most Americans who were raised Catholic but have since left the church could not envision themselves returning to it, according to a new Pew Research Center survey examining American Catholics and family life. The survey’s findings were released Wednesday, weeks before Pope Francis makes his first visit to the United States, and as Catholic leadership contends with dramatic demographic shifts. 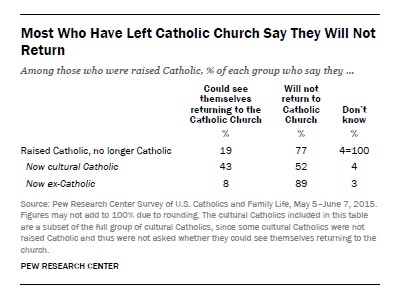 Seventy-seven percent of those who were raised Catholic but no longer identify with the religion said they could not envision themselves eventually returning to the church, according to the Pew survey. The survey also examined U.S. Catholics’ views on issues such as divorce, same-sex marriage and sinful behavior, finding an openness for non-traditional family structures.

Although Catholics have long made up about a quarter of the U.S. population, recent data has shown that percentage dropping. In 2007, 23.9 percent of Americans identified as Catholic. In 2014, 20.8 percent of Americans said the same, according to previous survey results from Pew.

But the new survey illustrates something else about Catholic life in the United States: while the percentage of Americans who may identify their religion as Catholicism is dropping, a much larger group of Americans identify as Catholic in some way.

In all, 45 percent of Americans say they are either Catholic, or are connected to Catholicism. That larger percentage includes “Cultural Catholics” (making up nine percent of those surveyed) who are not practicing Catholics but who identify with the religion in some way; and “ex-Catholics” (also nine percent) who were formerly Catholic but no longer identify with Catholicism at all. And another eight percent said they had some other connection to Catholicism, for instance by having a Catholic partner or spouse. For the purposes of the survey, Pew kept each category mutually exclusive.

According to the survey, about half of those who were raised Catholic end up leaving at some point, while about 11 percent of those who left have since returned.

The breakdown provides an interesting look at the cultural reach of Catholicism, beyond those who would call themselves members of the religion. For instance, the survey also found that eight in ten American Latinos have some direct connection to Catholicism, whether as a current practicing Catholic, as an ex-Catholic, or otherwise. 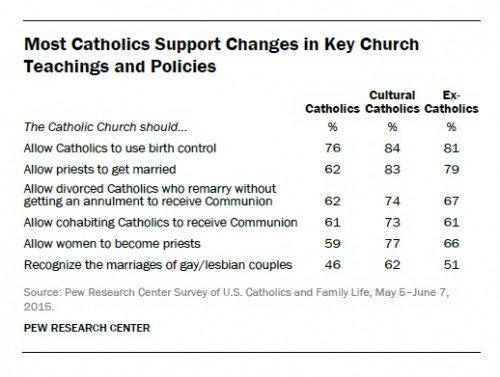 Among those Catholics who attend Mass weekly, support for these changes was lower overall. But Pew notes that even among this particular population, two-thirds of Mass-going Catholics think the church should relax its prohibition on contraceptives.

Although an overwhelming majority of Catholics (nine in ten) believe in the concept of sin, they don’t seem to agree on what, precisely, constitutes one. Fifty-seven percent of Catholics think it’s a sin to have an abortion, compared to 48 percent of the general U.S. population who say the same. Forty-four percent think homosexual behavior is sinful (about the same say this among the general public). And just 17 percent of Catholics believe its a sin to use contraceptives, while 21 percent say the same of getting a divorce.

Despite those disagreements between U.S. Catholics and church teaching, the poll does not indicate that a change in that teaching would lead more Catholics to “revert” to their faith than do already.

Cultural and ex- Catholics gave a variety of answers when asked why they decided to leave Catholicism, and no consensus emerges from those reasons that could point to any one factor driving away those who were raised Catholic from the faith. A 2008 Pew study asked a similar question, and found that fewer than one in four Catholics said that the rule banning priests from marrying was an important reason for leaving Catholicism. About 3 in 10 said that the church’s teachings on abortion and remarriage were important.

Far more common, in that 2008 survey, were those who said they simply stopped believing the church’s overall teachings, or gradually drifted away from Catholicism, or said that their spiritual needs weren’t being met.

The latest survey finds clearer answers for why “cultural Catholics” identify with the religion in some non-religious way – 59 percent of those who were raised Catholic or have a Catholic parent cite this familial connection as the reason they are tied to the church. Cultural Catholics without a parental connection cite a variety of reasons, including having a Catholic spouse (15 percent), a general affiliation with Christian beliefs or practices (nine percent) or the idea that their religion is rooted in Catholicism (15 percent).

The 2015 Pew survey was conducted between May 5 and June 7 among a national sample of 5,122 adults reached on conventional cellular phones, including 1,016 Catholics. The margin of sampling error for results among Catholics is plus or minus 3.5 percentage points; the error margin is 5.5 points among the sample of 425 “Cultural Catholics” and among the sample of 413 “Ex-Catholics.”