I was absolutely mesmerized by the recent papal visit to Spain for World Youth Day. I confess it was a morbid curiosity in the spectacle, but who among us doesn’t have a guilty pleasure or two? My clergy days are way behind me, but the pomp and ceremony are still very familiar and even a little beguiling.

Benedict XVI, the kindly grandfather figure, kisses babies, waves to the crowd from what looks like a clown car. Yet there was a palpable tension in the air that was not missed by the devout and the skeptic alike. The pope came to Spain to mark his territory and that is always an anxious time for those whose territory he invades. 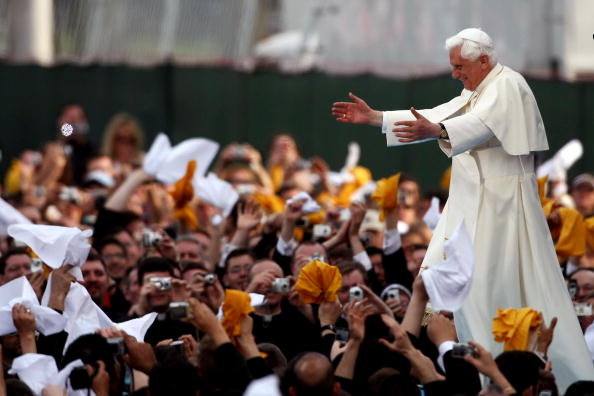 The innocuous visit soon turned ominous when the elderly pontiff began to scold against the dual evils of relativism and secularism. You’d think having so much to apologize for in terms of the worldwide priest sex abuse scandal he’d take a more humble approach to our common human foibles. But there was no hint of that.

His litany of our cultural sins is as familiar as his papal vestments. Abortion; homosexuality, particularly those who advocate same-sex marriage; sexual permissiveness among the young; and the spiritual vacuum at the heart of a modern society bent on instant gratification. The common thread being an abhorrence of sexual pleasure.

Catholic doctrine specifically states that the sacred act of procreation is the only legitimate reason for sexual expression and that, or course, can only occur within the confines of a marriage between one man and one woman. If a married couple is interested in having intercourse, then they’d better be willing to accept the real potential for creating another life each and every time.

On New Year’s Eve 1930, the Roman Catholic Church officially banned all “artificial” means of birth control. Condoms, diaphragms and cervical caps are artificial, in as much as they block the natural journey of sperm during intercourse. Douches, suppositories and spermicides kill or impeded sperm, so they too are banned. Tampering with the “male seed” is tantamount to murder. A common admonition at the time was “so many conceptions prevented, so many homicides.” To interfere with God’s will is a mortal sin and even grounds for excommunication.

Catholics are left with abstinence or the rhythm method (the practice of abstaining from sex during a woman’s period of ovulation) as the only means of family planning. But, the rhythm method is wildly unreliable. The roulette of it all places its heaviest strain on the women, but the marital relationship is also stressed.

In 1966 the Church revisited the doctrine. A papal commission set up to review the dogma voted 30-5 to relax the concerns on birth control. But in 1968, Pope Paul VI issued his encyclical, Humanae Vitae which overrode the bishops and reiterated the anti-birth-control stance. He said this was necessary for several reasons. Chief among them was — if sex were not about creating children in a loving family unit, then sex would solely be about pleasure with no responsibility. Men would simply use women as pleasure objects and would lose respect for them.

Some argued that Pope Paul’s decision to issue the letter was more about exerting papal authority then it was about birth control. They claimed he wanted to reserve to himself the authority to decide the issue rather then let the bishops of Vatican II decide. But I see it differently; the pope had virtually no choice. If he buckled on the bedrock issue of the procreative nature of sex he would have undercut the totality of Catholic sexual morality. There’d no longer be a cogent argument for outlawing masturbation, homosexuality, premarital sex, extramarital sex and divorce as disordered and intrinsically evil.

Obviously, the practical application of this encyclical goes way beyond the marital bed. It prohibits condoms in the fight against AIDS; young people are set adrift in a void of sex education; teenage pregnancies soar; gay and lesbian people are vilified; and married people as well as theologians are left questioning the relevancy of a doctrine that causes so much harm.

But, in this matter at least, that faithful have spoken. The Center of Disease Control and Prevention’s 2002 National Survey of Family Growth revealed that 97% of American Catholic women over age 18 have used a form of contraception, which is the same percentage as the general population. A 2005 nationwide poll of 2,242 U.S. adults by Harris Interactive showed that 90% of Catholics supported the use of birth control. Use of modern contraceptive methods is also high in many predominantly Catholic countries: 67% of married women of child-bearing age in Spain, 69% in France, 60% in Mexico, and 70% in Brazil.

These statistics underscore what we’ve all known for a long time. There is massive “disobedience” on the part of Catholic faithful. But they’re not being obstinate just to be contrary. These are women and men of conscience, who have weighed the Vatican arguments and found them wanting. Most Catholics know their religious affiliation is more than a slavish adherence to dogma; they know that it actually means finding the divine in the crucible of their own life.

Part 1 of this series HERE!