This column concludes my series on Roman Catholic moral (sexual) theology. But before I move on to other topics I’d like to leave you with some tips on how you might make up your own mind when grappling with difficult moral issues.

In Part 1 of this series, A Key To Understanding Catholic Moral Theology, I talked about the cornerstone of all Catholic, and indeed all Christian, teaching — the principle of the primacy of one’s conscience. That is, you must follow the sure judgment of your conscience even when, through no fault of your own, it might be mistaken. 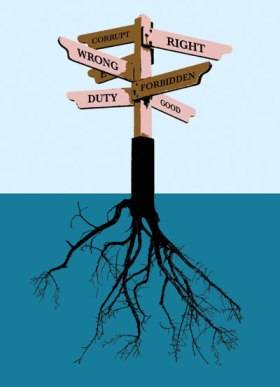 Tip 1 — When faced with a moral dilemma, start with some soul-searching. Your conscience is, in fact, your primary connection with your God. No law, dictum or dogma can take precedence over your conscience. I contend that we don’t need theologians to tell us what is right and wrong or what is just and unjust. We simply need to tap into that simple formula called the golden rule. Deal with others, as you would like others to deal with you. That pretty much covers everything.

As we’ve seen in this series, much of Catholic moral theology is shame based. Shaming is a very effective means of regulating an individual’s behavior so that it conforms to the mores of the group. But capitulating to shame is never the same thing as acting morally. In fact, in many situations the moral thing to do is to stand against the prevailing opinions of the group.

Tip 2 — Try to unravel the system that instills the shame. If you go back to the source of the shaming you will, most likely, discover the reason why the shaming continues. I gave you a good example of this in Part 1 of this series. “To get a handle on Catholic moral theology one must first grasp the depth and breath of it’s institutionalized misogyny.“ Once you uncover the root of the shame you can demythologize it. This will free you up to form your moral decisions less encumbered with dubious communal mores.

Guilt-based theology is dependent on demonizing people or behaviors. When people blindly accept what they are told, they perpetuate the communal mores even if they are unjust or intolerant. Sometimes this becomes so extreme that whole groups of people are vilified often using only stereotypes as evidence of their wrongdoing.

As I pointed out in Part 2 of this series, Sins Of The Flesh, it all begins with language. That’s “wrong”, “dirty”, “bad”, “disordered”, “unnatural” or “intrinsically evil”. In short order this incendiary language becomes a rallying cry that inevitably sets in motion active persecution. Moral maturity, on the other hand, demands that each of us take responsibility for our judgments and prejudices. If nothing more, this process of owning our biases slows down our rush to judgment.

Tip 3 — When faced with a shaming statement, like “that’s wrong”, it’s incumbent upon us ask why it’s wrong and who is making that judgment call. Because if something is “wrong” that means there must be a “right” way. But who gets to determine that, and what are the criteria for making that judgment?

“That’s dirty, disordered, unnatural or intrinsically evil!” Are some body parts or some sexual behaviors more wholesome, more in keeping with the natural order, than others? Again, whose prejudices are at work here?

I suggest that theologians aren’t competent to offer the definitive interpretation of the natural world, but even if they were, we still should ask. How much of your “natural/unnatural” worldview is culturally induced and dependent? Remember, it was once anathema to suggest that the world is round and not the center of the universe.

Finally, Catholicism is not a club. Despite what the hardliners say, lock-step adherence to every facet of church dogma is not what determines ecclesial fellowship. Baptism is! Catholic Christianity is a faith community. That means it’s a living, breathing, malleable thing. Just as I pointed out in Part 4 of this series, Seismic Shift, even the Pope must, from time to time, bow to the currents of culture, history and science.

Tip 4 — Questioning systemic injustice or intolerance in the Church is the right, nay the responsibility, of every believer. And if you find yourself at odds with Church authorities on moral issues, know you are not alone. Catholic women and men of conscience have always been a voice of dissent within the church. Their loyal opposition is precisely what helps keep the hierarchy honest.

Of course the flip side of taking a conscientious stand against the institution can often result in ostracism, shunning and persecution as I pointed out in Part 3 of this series, Sacred Cows. But then again, no one ever said embracing gospel values was gonna be easy.