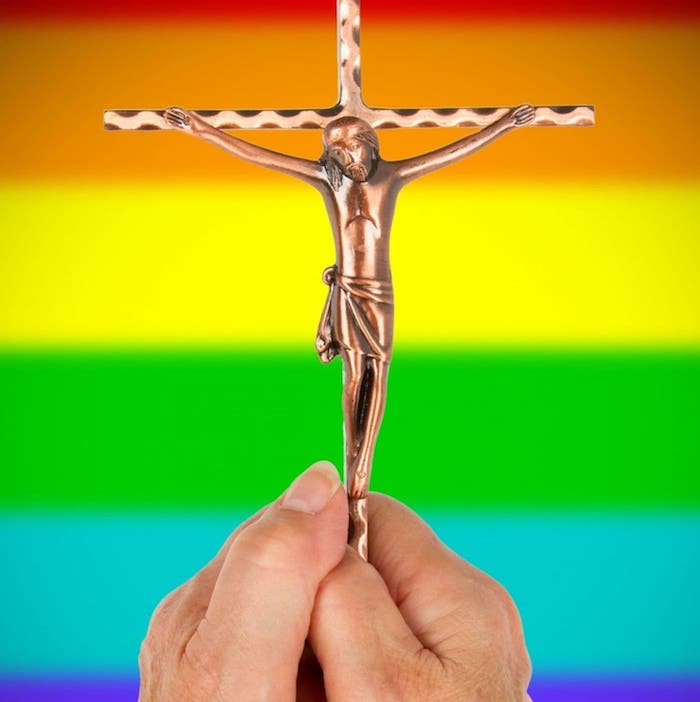 In a way, my sexuality has always been tied to my faith. My first romantic inclinations occurred during mass. I was in the pew, holding my parents’ hands and sneaking glances at the boy on the altar, holding a candle. Even though I was aware that my mind should have been on the liturgy, and not concerned with if he had smiled at me that Sunday or not, somewhere in my hormone-flushed pubescent brain, I found security in our weekly non-verbal dialogues.

I was a girl, and he was a boy. I was Catholic. He was Catholic. The possibilities that could sprout from any furthering of our tweenage flirtations were all fruitful. Everyone, even God, would be pleased.

The simplicity that comes with heterosexuality in the context of the Catholic church is something that I envied and coveted for so long. For straight people, it seemed just like a matter of falling in love. You fell in love, got engaged to tell the world you were in love, got married to seal that love and then had children who were the product of that love. Love was the vital driving force for how people moved from single individuals to a cleaved pair and how they became “one flesh.”

But if that was the case, then why was it that a year after things with the altar boy had ended, when I had started to find romance in girls as well as boys, love didn’t feel like enough?

My first crush on a girl wrecked me in a myriad of ways. Not only was I wholly unprepared for the displacement from the normative narrative of “girl meet boy” that my society and religion had fed me for so long, but I also experienced it all in a strange new land.

My family had just moved from Lagos, Nigeria to Georgia a year ago. The newness of my same-sex attraction was amplified by the novelty of being in America. Although, there were more methods for dealing with the culture shock than with my budding sexuality. My aunts and cousins who lived near us were a frequent Nigerian assuage to the barrage of Americanness we met everywhere we went. Plates of jollof rice and bowls of pepper soup supplemented the chicken and waffles we got for school lunch. Hearing my mom and aunts speak Igbo took the edge off the American-ish accent that was becoming a prominent part of my code switching toolbox.

Then there was church. The universality of the Catholic Church made it easy for it to be a place where to some degree, I could already fit in. I already knew all the rituals and traditions. I knew when to sit, when to stand, what words to say and what to do when I said them. This universality is one of the things that I love about being Catholic:  a steady relief knowing wherever I go, I can enter a Catholic church and be instantly united to those around me through our shared belief in God.

But having my faith as a source of joy and comfort also made it more difficult for me to reconcile my burgeoning attraction to girls. When it came to liking girls, I didn’t have that same feeling of security I had with boys. I had received a silent education on same-sex relationships. I knew that when I heard statements like “marriage is between man and women,” there was another lesson hidden in the negative: Marriage is not between man and man, or woman and women or any other configuration of people. From the start, I had absorbed the notion that there was something wrong about feelings toward girls. Like many others who have questioned themselves, I turned to the internet to externalize those internalized ideas. My search for answers covered a wide scope: from amateur responses on Catholic Answers to pastoral documents written by priests.

What I found were harsh truths surrounding issues like celibacy and adoption policies. The one that has stuck with me till this day is what the Catechism of the Catholic Church has to say on homosexuality, which includes the following:

“Basing itself on Sacred Scripture, which presents homosexual acts as acts of grave depravity, tradition has always declared that ‘homosexual acts are intrinsically disordered.’ They are contrary to the natural law. They close the sexual act to the gift of life. They do not proceed from a genuine affective and sexual complementarity. Under no circumstances can they be approved.”

What struck my 15 year old heart was the phrase “intrinsically disordered.” Though I am still not completely versed in the Catholic reading of the phrase, I know it means being out of the natural order and the basic inherent inclinations of human beings, such as the desire to be virtuous. Reading “intrinsically disordered” for the first time, I was less concerned with its theological definition, and more with the idea that something in me was just inherently corrupt.

This newfound self-perception was the beginning of many nights of falling asleep with tears drying on my face. I couldn’t understand how something that felt so much like a wonderful thing, felt so much like love 一 that so renowned attribute of Christianity 一 could be so immoral. It didn’t make sense that something that felt so natural for me was actually unnatural. I couldn’t comprehend it, but at least I could control it. Or so I thought.

What followed my reckoning with my “intrinsic disorderedness” was a series of scrupulous rules. I tried to avoid everything related to queerness. I didn’t allow myself access to the proliferating reservoir of queer representation in media. I chastised myself for taking delight in queer things, so I began to censure my world so I couldn’t take part in them anymore. But this didn’t stop the hurt that I was feeling. In fact, it only grew the wound that had formed from carrying negative perceptions of myself in secret.

I can’t sufficiently explain the process of coming out of that point in my life within the space of this essay, but it involved sharing my secret with my family, the people who love me the most, and lessening the pressure of trying to figure out everything on my own. Coming out to them and letting them into my struggle with sexuality wasn’t easy, but now I can see that it was better than enduring that struggle on my own.

Moving my journey with sexuality out of my personal realm and into a communal one was how I developed my current relationship between my queerness and my faith. Before, I was too preoccupied with the things that I felt I might be denied by being queer and Catholic 一 the marriage and children the hopeless romantic and caretaker in me so desperately desired 一 that I couldn’t see the ways in which I had been afforded new options as well, and most importantly, new passions.

My queerness has become an epistemological vantage point to look at my faith in a new light. Although I was always encouraged by my family to ask questions about the Church,  there was little to question because I viewed most things as simply the way things were. Discovering my own queerness raised new points of interrogation. I started to ask things like, why haven’t I heard of a patron saint of queer people? What are other vocational options outside of marriage and priesthood? How does the Church care for queer people? Most significantly, what are the factors that make so many queer people feel like God doesn’t love them and what can we do to change that?

The final question has been critical to my queer Catholic story. I was fortunate enough to never feel like God didn’t love me, even when I thought the worst about myself. My foundational Catholic education, inside and outside catechism classes, taught me that God’s love was unconditional. Throughout those long, emotional nights where I stared up at the green flashing light on the smoke detector, in the dark of my room and battled the conflicting desires within me, I never doubted that God still loved me. I was angry, sad and frustrated at God, but I was never unsure of His love for me.

The Catechism of the Catholic Church also says queer people should be “accepted with respect, compassion, and sensitivity. Every sign of unjust discrimination in their regard should be avoided. These persons are called to fulfill God’s will in their lives…” Even in the same document that brought me such pessimistic views of myself and my future, there were declarations that my life was still to be valued. In fact, I was still called to “fulfill God’s will” in my life. God still has a role for me to carry out on this earth, one that is special and particular to me.

This is the part of the catechism that I choose to focus on now. I believe that God’s will, in having me seriously contend with the intersection of faith and sexuality, is calling me to be an advocate for those who find themselves at that intersection. I believe the cycles of pain and joy I’ve undergone, and still go through, in the process of formulating and reformulating my identities, has given me an arsenal of experiences that I can put forth to help others like me. Though I’m still figuring out how to do that, I’m trying to take small steps to answer my call to queer Christian advocacy. I believe joining queer groups on campus is a step. Joining Christian groups is one step. Joining queer Christian groups is another step. My essay is a step. By the grace of God, I’m going to keep stepping in this direction. Hopefully further down the line, being queer and Catholic won’t feel like a curse born from contradiction, but a blessing in its own right.