Around 125 people including former and current priests in Germany came out as gay and queer and demanded an end to institutional discrimination against the queer community. 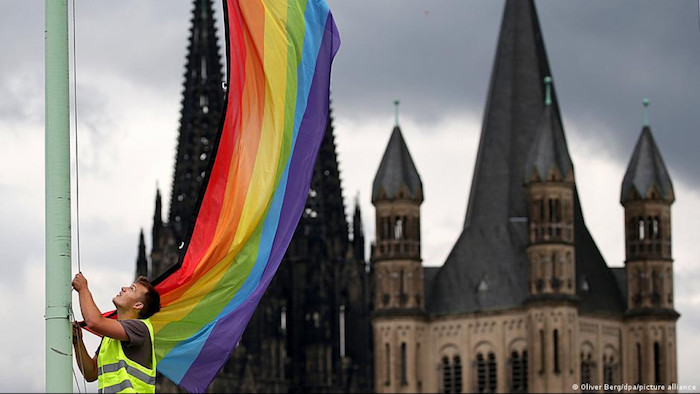 Over 120 priests and employees with the Catholic church community in Germany came out as queer and launched a campaign demanding an end to institutional discrimination against LGBTQ people.

The Roman Catholic Church in Germany on Sunday faced renewed calls for better protection of LGBTQ rights and an end to institutional discrimination against queer people.

Around 125 people, including former and current priests, teachers, church administrators and volunteers, identified themselves as gay and queer, asking the church to take into account their demands and do away with “outdated statements of church doctrine” when it comes to sexuality and gender.

The members of the church community published seven demands on social media under the “OutInChurch” initiative. These demands range from queer people saying they should be able to live without fear and have access to all kinds of activities and occupations in the church without discrimination.

They said their sexual orientation must never be considered a breach of loyalty or reason for dismissal from their occupation. They ask the church to revise its statements on sexuality based on “theological and human-scientific findings.”

Besides asking for equal rights, employees also put down demands that the church takes accountability for their discrimination against people of the community throughout history, calling on the bishop to take responsibility on behalf of the church.

What has been the Vatican’s stance?

The Vatican, home of the pope and the Roman Catholic Church, ruled last year that priests cannot bless same-sex unions and that such blessings weren’t valid.

But the ruling also reignited a debate on the matter, and there was considerable resistance against it in some parts of Germany.

Last year, at least two bishops in Germany, including Cardinal Reinhard Marx of Munich, one of the pope’s top advisers, showed some support for a kind of “pastoral” blessing for same-sex unions.

In Germany and the United States, parishes and ministers also began blessing same-sex unions in lieu of marriage, with growing calls for bishops to institutionalize gay marriage.

However, in response to formal questions from a number of dioceses on whether the practice was allowed, the Vatican’s doctrinal office, the Congregation for the Doctrine of the Faith (CDF) made clear it wasn’t, ruling: “negative.”

Pope Francis approved the response, adding that it was “not intended to be a form of unjust discrimination, but rather a reminder of the truth of the liturgical rite” of the sacrament of marriage.