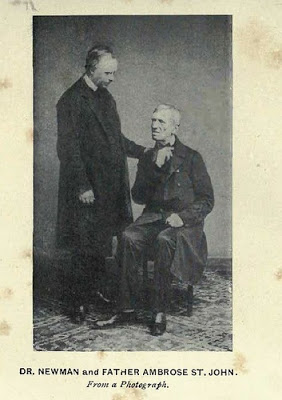 John Henry Newman, a renowned scholar-priest and Britain’s most famous 19th-century convert to Catholicism, was beatified in 2010 amid rampant speculation that he was gay. Newman’s feast day is Aug. 11 in the Anglican church and Oct. 9 in the Catholic church.

Newman and another priest, Ambrose St. John, lived together for 32 years and share the same grave. Some say they shared a “romantic friendship” or “communitarian life.” It seems likely that both men had a homosexual orientation while abstaining from sex. Newman described St. John as “my earthly light.” The men were inseparable. 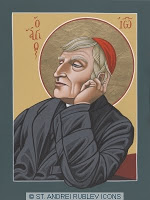 Newman (Feb. 21, 1801 – Aug. 11, 1890) is considered by many to be the greatest Catholic thinker from the English-speaking world. He was born in London and ordained as an Anglican priest. He became a leader in the Oxford Movement, which aimed to return the Church of England to many Catholic traditions. On Oct. 9, 1845 he converted to Catholicism. He had to give up his post as an Oxford professor due to his conversion, but eventually he rose to the rank of cardinal.

Ambrose Saint John (1815 -1875) apparently met Newman in 1841. They lived together for 32 years, starting in 1843. St. John was about 14 years younger than Newman. He compared their meeting to a Biblical same-sex couple, Ruth and Naomi.  In Newman’s own words, St. John “came to me as Ruth came to Naomi” during the difficult years right before he left the Anglican church.

After converting together to Catholicism, they studied together in Rome, where they were ordained priests at the same time. When St. John was confirmed in the Catholic faith, he asked if he could take a vow of obedience to Newman, but the request was refused. Newman recalled their early years in this way:

“From the first he loved me with an intensity of love, which was unaccountable. At Rome 28 years ago he was always so working for and relieving me of all trouble, that being young and Saxon-looking, the Romans called him my Angel Guardian.”

A portrait of Newman and St. John together in Rome was painted by Maria Giberne, an amateur artist and a lifelong friend of the Newman family who followed him into the Catholic church. She painted the couple sitting together with their books in one of their rooms at the Propaganda College in Rome on June 9, 1847. Standing between them is Our Lady of the Miraculous Medal, who appears to be blessing and watching over the priests who loved each other.

St. John, a scholar and linguist in his own right, helped Newman with his scholarship and shared other aspects of daily life as if they were a couple in a same-sex marriage. John Cornwell, author of Newman’s Unquiet Grave: The Reluctant Saint, told National Public Radio that St. John’s support for Newman included “even doing things like packing his bags before he went away, making sure he was taking his medicine, making sure he kept dental appointments, that sort of thing. So it was almost like a wife, but without the marital bed.”

They lived together until St. John died on May 24, 1875. He was only about 60 years old. According to a memorial letter written by Newman himself, St. John died of a stroke that “arose from his overwork in translating Fessler, which he did for me to back up my letter to the Duke of Norfolk.” Newman needed a translation of the German theologian Joseph Fessler’s important book in the wake of the First Vatican Council.

In the memorial letter Newman goes on to describe their dramatic last moments together, including how St. John clung to him closely on the bed and clasped his hand tightly. Newman, unaware that his beloved companion was dying, asked others to unlock his fingers before saying the goodbye that turned out to be their last.

Newman was heartbroken by the loss of his beloved partner. “I have always thought no bereavement was equal to that of a husband’s or wife’s, but I feel it difficult to believe that anyone’s sorrow can be greater than mine,” Newman wrote.

He insisted three different times that he be buried in the same grave with St. John: “I wish, with all my heart, to be buried in Father Ambrose St. John’s grave — and I give this as my last, my imperative will,” he wrote, later adding: “This I confirm and insist on.” 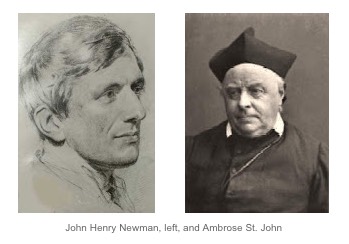 Newman died of pneumonia on Aug. 11, 1890 at age 89. According to his express wishes, he was buried with St. John. The shroud over his coffin bore his personal coat of arms with the Latin motto, “Cor ad cor loquitur” (Heart speaks to heart), which he adopted when he became cardinal. Their joint memorial stone is inscribed with a Latin motto chosen by Newman: “Ex umbris et imaginibus in veritatem.”(Out of the shadows and reflections into the truth.”) They share a small grave site in the central English town of Rednal.

During the beatification process, the Vatican tried to violate Newman’s desire to be buried with his beloved companion. Vatican officials hoped to excavate and move his remains to a specially built sarcophagus in Birmingham in preparation for his beatification. Controversy arose as some LGBT activists saw the decision to disturb the shared grave as an attempt to separate them and cover up the queer side of Newman’s life. However when the grave was opened in 2008, the remains had completely decomposed, leaving nothing that could be separated.

Newman’s legacy is wide-ranging. Because Newman was an excellent scholar, Catholic centers on U.S. college campuses are named after him. Newman tells his own story in his acclaimed spiritual autobiography, Apologia pro Vita Sua . He is known for writing the poem “The Dream of Gerontius” and the popular hymn “Lead, Kindly Light.”

His theology of friendship and his emphasis on conscience are both significant for LGBT people and allies. Although the Catholic church tends to frown on special friendships among priests, nuns or monks, Newman taught, “The love of our private friends is the only preparatory exercise for the love of all men.” He preached, “The best preparation for loving the world at large, and loving it duly and wisely, is to cultivate our intimate friendship and affection towards those who are immediately about us.”

Terence Weldon at Queering the Church explains how Newman’s teaching on conscience laid the groundwork for LGBT Christians today. “As a theologian, Cardinal Newman played an important role in developing the modern formulation of the primacy of conscience, which is of fundamental importance to LGBT Catholics who reject in good conscience the standard teaching on sexuality – or the high proportion of heterosexual couples who reject ‘Humanae Vitae,’” Weldon writes.

This post is illustrated with icons of Newman by Robert Lentz and William McNichols. Both artists faced controversy for their alternative and LGBT-affirming images.

With beatification, Blessed Newman is now only one step away from official sainthood. He is already a saint in the hearts of many, including the LGBT people who are inspired by his life and love.

His name is invoked in an official Catholic prayer:

O God, who bestowed on the Priest Blessed John Henry Newman
the grace to follow your kindly light and find peace in your Church;
graciously grant that, through his intercession and example,
we may be led out of shadows and images
into the fulness of your truth.

___
Author’s note: I decided to write this comprehensive piece about the love between Newman and St. John when I discovered that it had not been done yet on the Internet from a LGBT-positive viewpoint. I was one of many bloggers on both sides who wrote about whether Newman was gay at the time of his beatification, citing a few facts. I thought I would just do a quick update to focus on his achievements and his relationship with St. John.

But as I got into the research, I was surprised both by how compelling their love story is, and how hard it was to find an overview of their relationship on the Internet. Details of their deep love for each other are available on the Web, but mostly on websites that aim to prove they were not homosexual. It’s odd how they end up supporting the very point that they are trying to discredit. So I put it all together from a queer point of view.