The majority of Americans who identify as religious say they favor allowing gays and lesbians to legally marry and oppose policies that would give business owners the right to refuse services to same-sex wedding ceremonies, according to data compiled by the Public Religion Research Institute.

The data, which has an error margin of less than 1 percentage point, finds that the majority of only three religious demographics — white evangelical Protestants, Mormons and Jehovah’s Witnesses — said they oppose “allowing gays and lesbians to marry legally.”

By comparison, only 28 percent of white Mainline Protestants and white Catholics, 25 percent of Hispanic Catholics and 30 percent of Orthodox Christians said they oppose allowing gays and lesbians to legally marry. 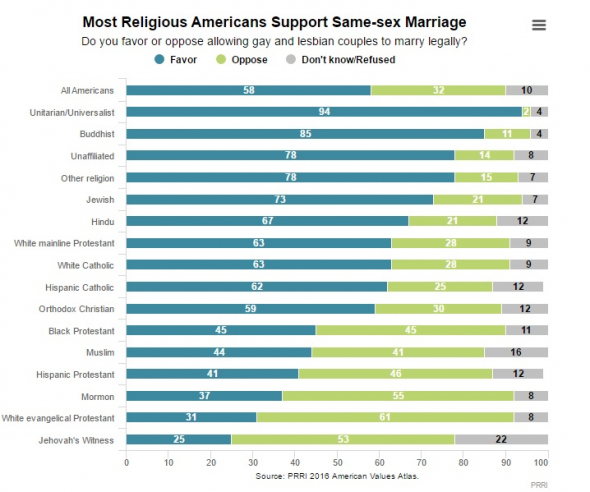 As reports have indicated in the last week that President Donald Trump is considering a possible “religious freedom order” that conservative religious freedom advocates say could do many things to protect the rights of religious institutions and federal contractors to operate their organizations in accordance with their beliefs, the PRRI data also shows that most American religious demographics oppose allowing businesses to refuse services for same-sex wedding ceremonies based on religious objections.

In recent years, small business owners across the U.S. were fined, sued and punished over their refusal to provide services for same-sex weddings because their participation would violate their religious beliefs. Advocates have called for state governments to give these religious business owners accommodations to non-discrimination laws, while opponents claim such exemptions would give these businesses a license to discriminate. 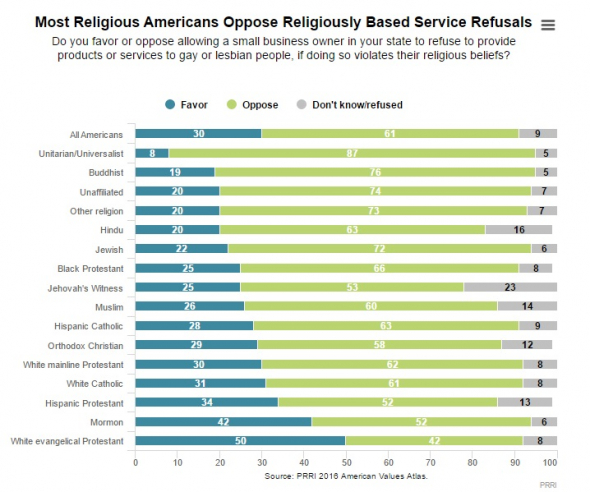