I wanted to be a priest ever since I was a little boy and I overcame the greatest of odds to achieve my life’s goal.  On Saturday, November 22, 1975, I was ordained a Catholic Priest at the Cathedral of Saint Francis de Sales in Oakland, CA. 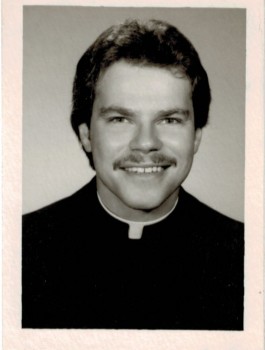 The Oblates of Mary Immaculate, my religious community at the time, assigned me to post graduate studies in San Francisco in 1978.  I completed that assignment in January 1981 with my dissertation, Gay Catholic Priests; A Study of Cognitive and Affective Dissonance.  A media firestorm erupted shortly there after when I publicly identified myself as gay. (I had come out to my provincial superiors before I was ordained six years earlier.)

When word got to Rome, however, the Oblates began a process to dismiss me from the community.  They erroneously accused me of “living a false lifestyle” because of my public declaration a month earlier.  The community leadership claimed that anyone who would self identify as gay must also be sexually active.  In their defense, it was 1981, and I had just studied a population of gay priests in the active ministry, years and years before the Church could even bring itself to admit that there were such a thing as gay priests in their midst. Nonetheless, my efforts to explain myself and the nature of self-identification fell on deaf ears.  I was to be made an example of how others would be treated if they came out.

Priesthood was my whole life.  To be cut off from the community and ministry in an instant, without due process nearly killed me.  And thus, began a grueling 13-year battle with the Church to save my good name, my priesthood, and my ministry.  I chronicled this odyssey in a book published in 2011, Secrecy, Sophistry And Gay Sex In The Catholic Church. 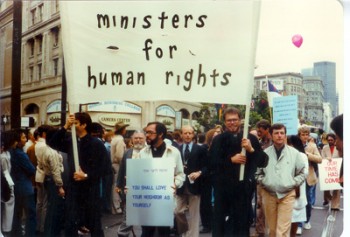 I lost the battle in 1994; I was dismissed from the Oblates.  But I believe I won the war.

Martin Luther King, Jr once said, “The arc of the moral universe is long but it bends toward justice.”  Looking back on the last 40 years, I can see clearly that Dr King was right.  LGBT people have gone from pariah status to having their relationships granted the same legal and societal status as straight people.  Acceptance of LGBT people is at an all-time high in this country and throughout most of the world.  And young U.S. Catholics overwhelmingly accept LGBT people.

Unfortunately, Church leadership continues to drag it’s feet.  While there are some enlightened bishops, and certainly the Pope is pointing the way, most of the other church leadership have their head in the sand.  The rear-guard action of trying to defend the indefensible continues unabated.  Gay priests are still persecuted for coming out and the clerical closet continues to make Catholic priest sick, sometimes even to death,  One has to ask; how can anyone preach the Good News while living a lie? 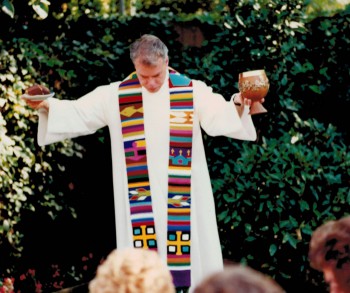 Forty years after ordination, I believe that I now know the real meaning of priesthood and ministry.  And I can safely say that it has nothing to do with the ritual depicted in the photos above.  My priesthood and ministry are rooted in knowing who I am and knowing that God called me as I am.  My priesthood is to the people on the margins and the sexual fringe.  And my priesthood means speaking truth to power and supporting others to do the same. I continue to stand against the fear, ignorance, and repression that destroys God’s people. And if I have to do my priesthood standing this distance from the altar, then I’m ok with that.