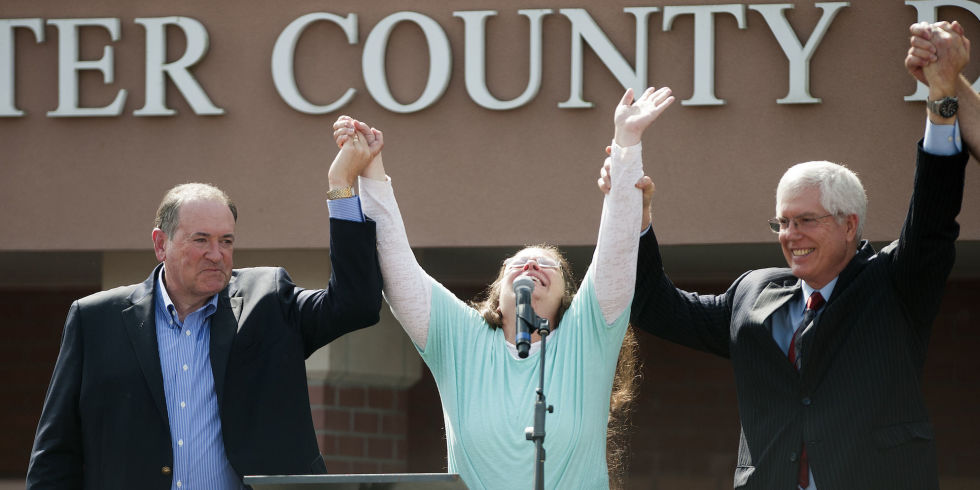 The big news today seems to be that Kim Davis, the goldbricking county clerk from Kentucky, met secretly with Papa Francesco in Washington and that he endorsed her current status as a faith-based layabout. Given this pope’s deft gift for strategic ambiguity and shrewd public relations, it’s hard for me to understand how he could commit such a hamhanded blunder as picking a side in this fight. And it’s odd that he (or someone) sought to publicize it through an American media entity that is not wholly sympathetic to his papacy. Inside The Vatican, the e-newsletter that broke the story, is edited by Robert Moynihan, a 79-year old whose patron was Benedict XVI.

God, the crowing from the Right is going to be deafening. Everything he said about capitalism and about the environment is going to be drowned out because he wandered into a noisy American culture-war scuffle in which one side, apparently the one he picked, has a seemingly ceaseless megaphone for its views. What a fcking blunder. What a sin against charity, as the nuns used to say.

This is, obviously, the dumbest thing this Pope ever has done. It undermines everything he accomplished on his visit here. It undermines his pastoral message, and it diminishes his stature by involving him in a petty American political dispute. A secret meeting with this nutball? That undermines any credibility he had accrued on the issue of openness and transparency. Moreover, it means that he barbered the truth during the press conference he held on his flight back to Rome, in which he spoke vaguely about religious liberty, and freedom of conscience, but claimed, “I can’t have in mind all cases that can exist about conscience objection.”  He certainly knew the details of this case.

I really wish I could blame this on some shadowy Vatican cabal. Not that there aren’t some really weird elements to the story.

In case you were wondering about the publication that got the message out, it’s an e-newsletter whose editor-in-chief, Moynihan, is entirely a creature of the Catholic Right, at least as far as his career as a journalist is concerned. He was originall encouraged in his efforts by then-Cardinal Josef Ratzinger, and he built his publication specifically to take advantage of the climate of apologetics among conservative Catholics that Ratzinger best represented.​

I then began making calls—to Phil Lawler, to Father Richard Neuhaus, to David Schindler, to Deal Hudson (who at that time was known as a Maritain scholar), to Stratford Caldecott, and to many others. I was seeking insight into what people thought was needed. What message would The Catholic World Report proclaim? I knew I did not want it to be superficial or knee-jerk; I wanted it to be profound, provocative, and fearless, looking at the world from a thoroughly Catholic perspective. One great concern I had was that we would be “too American.” Then Father Fessio explained that we would not be alone, but together with some French and Spanish editors in a group which would be called “I.Media,” short for “International Media.” The French would be financed by Vincent Montagne’s publishing group, Media-Participations, the largest Catholic publisher in France, and the Spanish by the Legionaries of Christ.

​That list is more than something of a tell. His good friend, Father Joseph Fessio, is an important figure among American conservative Catholics. He founded Ignatius Press, and he was twice fired from his posts at Ave Maria University,  the bungled attempt at creating a papist Bob Jones University—​and recreating Franco’s Spain around it—​in Florida funded by pizza billionaire Tom Monaghan. Lawler writes for an extremely conservative Catholic website, and he once chastised Sean Cardinal O’Malley because, in a sermon he’d given after the Boston Marathon bombings, O’Malley had mentioned this country’s lax gun-control laws as contributing to a “culture of death” which included abortion, and that O’Malley had failed to use the words “Islamic terrorism” in reference to the bombing. The late Father  Neuhaus was the crackpot editor of First Things, in which he once published a symposium that appeared to call on American Catholics to commit sedition. Deal Hudson founded and edited Crisis, a conservative Catholic journal, and was the director of Catholic outreach for George W. Bush’s campaigns in 2000 and 2004.  Hudson was forced to resign from a position at the Republican National Committee under very strange circumstances. And space limitations preclude discussing all the horrors of the Legionaries of Christ, which Moynihan says financed the Spanish edition of his publication.​

There is no question that the conservative Catholic backlash began as a response to the ever-detonating scandal involving the sexual abuse of children by Catholic clergy, and the international conspiracy to obstruct justice that followed. An explosion of revelations was followed by a well-financed explosion of apologetics. The latter emphasized that liberal Catholics were using the scandal to attack the Church generally. I wrote extensively about it at my previous gig. This did not abate during the papacy of Benedict XVI, and there exists a kind of silent civil war in Catholicism that continues to this day.

(It’s here where I should mention that there is a serious line of thought among Catholic conservatives that Benedict was forced into retirement by a cabal of liberals. There’s even a new book on the subject that Rod Dreher found interesting, although I have to admit that, every time I hear the author’s name—​Gottfried Danneels!—​I hear it in the voice of W.C. Fields.)​

So not only has the pope trashed whatever good will he’d accrued here, he (or someone) did so through a publication aligned with the forces in the church opposed to everything for which his papacy allegedly stood. He did a really stupid thing and he (or someone) is dealing with the dingier elements of the religious media to get the news out. Somebody needs to get fired behind this. Who are you to judge, Papa Francesco? I’m afraid you just did. I will pray for you, because, damn, son, you need it.