Pope Francis reached out to gays on Monday, saying he wouldn’t judge priests for their sexual orientation in a remarkably open and wide-ranging news conference as he returned from his first foreign trip.

“If someone is gay and he searches for the Lord and has good will, who am I to judge?” Francis asked. 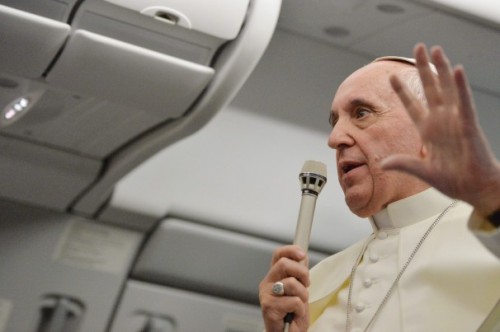 Pope Francis urged young Catholics to shake up their dioceses and get out and preach during his trip to Rio de Janeiro.

His predecessor, Pope Benedict XVI, signed a document in 2005 that said men with deep-rooted homosexual tendencies should not be priests. Francis was much more conciliatory, saying gay clergymen should be forgiven and their sins forgotten.

Francis’ remarks came Monday during a plane journey back to the Vatican from his first foreign trip in Brazil.

He was funny and candid during his first news conference that lasted almost an hour and a half. He didn’t dodge a single question, even thanking the journalist who raised allegations reported by an Italian newsmagazine that one of his trusted monsignors was involved in a scandalous gay tryst.

Francis said he investigated and found nothing to back up the allegations.

Francis was asked about Italian media reports suggesting that a group within the church tried to blackmail fellow church officials with evidence of their homosexual activities. Italian media reported this year that the allegations contributed to Benedict’s decision to resign.

Stressing that Catholic social teaching that calls for homosexuals to be treated with dignity and not marginalized, Francis said it was something else entirely to conspire to use private information for blackmail or to exert pressure.

Francis was responding to reports that a trusted aide was involved in an alleged gay tryst a decade ago. He said he investigated the allegations according to canon law and found nothing to back them up. But he took journalists to task for reporting on the matter, saying the allegations concerned matters of sin, not crimes like sexually abusing children.

And when someone sins and confesses, he said, God not only forgives but forgets.

“We don’t have the right to not forget,” he said.

The directness of his comments suggested that he wanted to put the matter of the monsignor behind him as he sets about overhauling the Vatican bank and reforming the Holy See bureaucracy.

Speaking in Italian with occasional lapses in his native Spanish, Francis dropped a few nuggets of other news:

— He said he was thinking of traveling to the Holy Land next year and is considering invitations from Sri Lanka and the Philippines as well.

— The planned Dec. 8 canonizations of Popes John Paul II and John XXIII will likely be postponed — perhaps until the weekend after Easter — because road conditions in December would be dangerously icy for Poles traveling to the ceremony by bus.

— And he solved the mystery that has been circulating ever since he was pictured boarding the plane to Rio carrying his own black bag, an unusual break from Vatican protocol.

“The keys to the atomic bomb weren’t in it,” Francis quipped. Rather, he said, the bag merely contained a razor, his breviary prayer book, his agenda and a book on St. Terese of Lisieux, to whom he is particularly devoted.