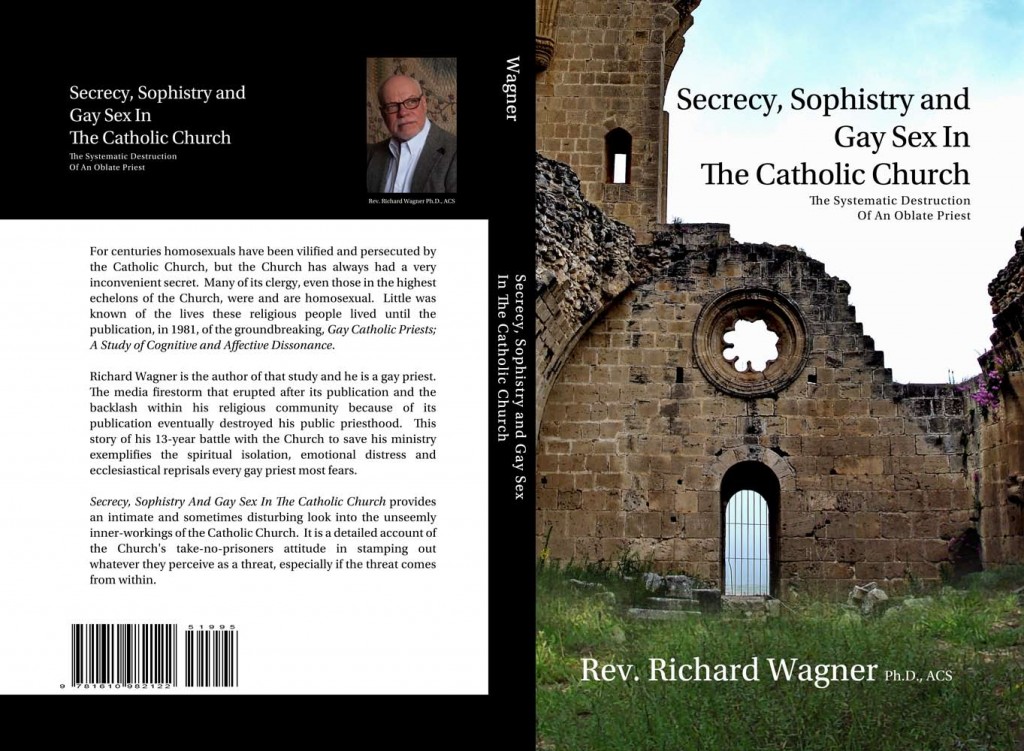 Synopsis
================
For centuries homosexuals have been vilified and persecuted by the Catholic Church, but throughout all of its history the Church has had a very inconvenient secret. Many of its clergy and religious men and women, even those in the highest echelons of the Church, were and are homosexual. Little was known of the lives these religious people live until the publication, in 1981, of the groundbreaking, Gay Catholic Priests; A Study of Cognitive and Affective Dissonance.

I am the author of that study and I am a gay priest. But the media firestorm that erupted after its publication and the backlash within my religious community because of its publication eventually destroyed my public priesthood. The story of my 13-year battle with the Church to save my ministry exemplifies the spiritual isolation, emotional distress and ecclesiastical reprisals every gay priest most fears.

A Brief Description
================
Secrecy, Sophistry And Gay Sex In The Catholic Church provides an intimate and disturbing look into the unseemly inner-workings the Catholic Church. It is primarily a story about how this institution deals with dissent in its midst, but it also shows to what lengths the Church will go to silence a whistle-blower. What I am about to recount happened between 1981 and 1994. It involves the highest levels of the Vatican bureaucracy, secret documents, corporate incompetence, canonical corruption, and institutionalized homophobia on an epic scale.

The publication of my dissertation broke the seal on the Vatican’s gay secret. The press dubbed me “The Gay Priest,” but my research and what it implies made patently clear that I wasn’t the only gay priest. In fact, there is a sizable segment of the clergy population that is gay and these men are forced to live duplicitous lives of repression in secret.

The Church’s single-minded effort to quash the emerging story and silence me showed that I needed to be “dealt with” in the most severe fashion; an example had to be made of me. If other priests started coming out of the closet, demanding to be treated with dignity and respect it would certainly undercut the entirety of Catholic sexual moral theology—there is no place for non-reproductive sexuality in that paradigm.

The irony is that at the same time my story was unfolding an unimaginable scandal, involving hundreds of Catholic priests across the globe, was also brewing. Cardinals, bishops and provincials worldwide were, and still are, furtively shuffling pedophile priest from one crime scene to another. They were, and still are, involved in a massive corporate cover up of their own crimes and those of their brother clergy.

While I am being singled out for 13 years of Church vitriol, public character assassination and communal shunning—my superiors claim that they are simply trying to protect the Church from scandal—these same Church leaders and others are lying, prevaricating and sabotaging any effort to uncover the burgeoning clergy sexual abuse scandal that would soon rock the front pages of newspapers all over the world.

The public panic, among Church officials, exhibited toward me—a single up-front gay priest in their midst—is in stark contrast to their apathetic and anemic response to the systemic clergy sexual abuse that engulfs them.

I am confident making the comparison between my struggle and the clergy sex abuse scandal, because I have first-hand knowledge of this abuse criminality. I was repeatedly sexually molested as a 14-year-old boy in an Oblate seminary in southern Illinois.

My story is the story of a Church that will go to any length, even to violate its core principles—Gospel values that form the fundamental tenets of faith—to protect its public image. In other words, this is a story of a Church out of control.

Secrecy, Sophistry And Gay Sex In The Catholic Church: The Systematic Destruction Of An Oblate Priest, is presented in two distinct parts.

I am the only Catholic priest in the world with a doctorate in Human Sexuality. My practice has included a special outreach to survivors of clergy sex abuse and I’ve had many opportunities to work with clergy offenders. I am available to clergy abuse survivors and their advocates as a consultant, expert witness and/or therapist.

I design, develop and produce long and short-term seminars and workshops for healing and helping professionals including religious leaders. And I’ve have facilitated support groups for gay clergy of numerous denominations for many years.

I’m involved in numerous sex education and sexual enrichment projects. One such outlet is my online sex advice column that I’ve been writing for the past 15 years. During that time it’s been syndicated on a number of sites. Now my column and weekly podcasts has a home of their own: drdicksexadvice.com. I am also a guest columnist on several other websites.