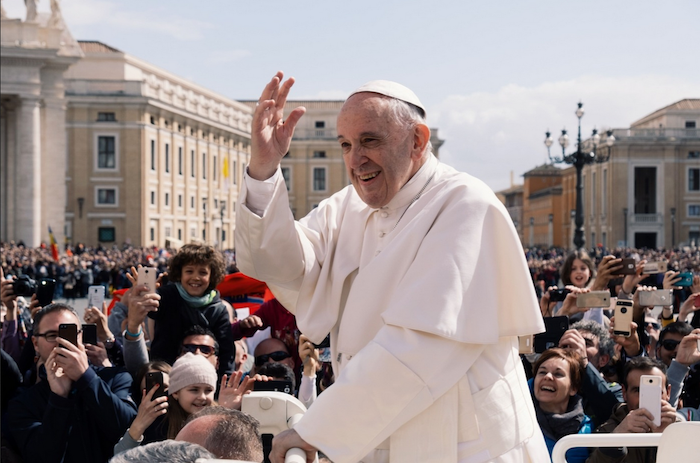 Pope Francis has invited LGBT advocates to the Vatican. He has spoken warmly about the place of gays in the church. He has called for national laws for same-sex civil unions.

But Monday, Francis definitively signaled the limits to his reformist intentions, signing off on a Vatican decree that reaffirms old church teaching and bars priests from blessing same-sex unions.

The pronouncement, issued at a time when some clerics were interested in performing such blessings, leans on the kind of language that LGBT Catholics have long found alienating — and that they had hoped Francis might change. It says that same-sex unions are “not ordered to the Creator’s plan.” It says acknowledging those unions is “illicit.” It says that God “cannot bless sin.”

The decree shows how Francis, rather than revolutionizing the church’s stance toward gays, has taken a far more complicated approach, speaking in welcoming terms while maintaining the official teaching. That leaves gay Catholics wondering about their place within the faith, when the catechism calls homosexual acts “disordered” but the pontiff says, “Who am I to judge?Francis’s words expected him to dramatically alter the church’s stance on LGBT matters. Many times, he has stated his opposition to same-sex marriage. Officially, the church says that sex should be between a man and a woman, for the purpose of procreation. Changing any part of that would also prompt a reconsideration of other church positions, whether on gender or contraception.

Though the Vatican did not specify what prompted the decree, it was written in response to existing doctrinal questions. Some Vatican watchers speculated that the church might be responding directly to bishops in Germany, who are in the middle of a multiyear series of meetings — to the alarm of conservatives — aimed at reevaluating major aspects of the church, including sexuality and the role of women.

In a 2019 interview with The Washington Post, Bishop Franz-Josef Bode, the deputy chairman of the German bishops’ conference, said that although he could not bless same-sex unions — “that would not be approved by Rome,” he said — he didn’t object if priests wanted to be with couples in a civil ceremony outside the church.

“I like to give the priests freedom to decide themselves,” Bode said

Monday’s note referred vaguely to proposals to bless same-sex unions “being advanced” in some quarters.

But the church’s doctrinal body, the Congregation for the Doctrine of the Faith, said blessings can only be invoked on a relationship when it is “positively ordered to receive and express grace.”

In some issues of controversy, Francis has left decision-making up to local churches, comfortable with policy that varies from country to country or even parish to parish. But in this case, Francis took the opposite approach — one that will put pressure on liberal clerics to fall in line.

Chad Pecknold, a conservative theologian at Catholic University, said Francis was following in the mold of Pope Paul VI, who had seemed open to doctrinal change on sexual morality but then issued a 1968 edict reiterating the church’s ban on artificial birth control.

“This is Francis doing much the same — shocking progressives by affirming the church’s teaching that sexual activity outside of the marriage of one man and one woman is contrary to the good of human dignity,” Pecknold said.

The church said Monday that its determination was not intended to be “a form of unjust discrimination” and called on priests to welcome those with “homosexual inclinations” with respect and sensitivity. The decree said individual gay people could continue to be blessed by the church, provided they show “the will to live in fidelity to the revealed plans of God as proposed by Church teaching.”

The statement from the Vatican is fairly brief — 1½ pages — and begins with a succinct question, asking whether the church had the power to bless same-sex unions.

“RESPONSE: Negative,” the document answers, going on to elaborate.

The decree comes just five months after Francis roused hopes among LGBT Catholics with comments calling for same-sex couples to be “legally covered” by civil union laws. But there was a bit of mystery about whether the pope’s remarks had been meant to become public. The comments surfaced in a documentary premier, but they had originated from a portion of a 2019 interview with a Mexican broadcaster that was never aired.

Steve White, a fellow in the Catholic Studies Program at the Ethics and Public Policy Center in Washington, said people who expected Pope Francis to change the church’s position on same-sex unions were not being realistic

White, who describes himself as conservative, believes the pope is simply reiterating existing church teaching, even as he has expressed love for people who are LGBT without condoning their partnerships.

“This isn’t a waffling back-and-forth from Pope Francis,” he said. “This is totally consistent with statements like ‘Who am I to judge?’ People who don’t see that are misunderstanding the pope.”

But many gay Catholics, speaking Monday, said they felt betrayed or wounded by the church. Marianne Duddy-Burke, executive director of DignityUSA, America’s largest spiritual community of gay Catholics, said it is “hard for a lot of people to understand just how far removed the church is from human rights advances that are being made in the rest of society.”

Aurelio Mancuso, former head of Arcigay, Italy’s leading gay rights group, said that in a 2016 ceremony with his partner, a priest had blessed their wedding bands — and that such acts would continue to go on, “regardless of the reprimands.”

“Catholic homosexuals like me know the opinions and traditions of the Catholic Church,” Mancuso said. “The gist of it is that we’re not part of the Creator’s design, and are thus a sin, something that has to be corrected. It’s intolerable that the hierarchy — not the church — stubbornly keeps justifying a discrimination.”

But, he said, no matter the determinations inside the Vatican, the gates for greater acceptance had “already swung open.”< “This is a document that nobody needed,” Mancuso said. “It’s not about the truth of faith, but the opinion of the hierarchy Complete Article ↪HERE↩!