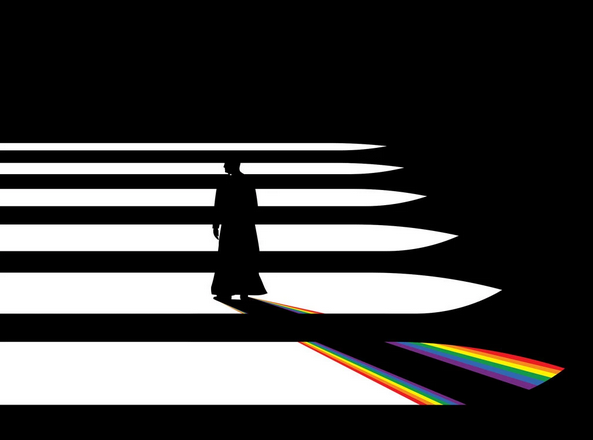 Marveling at the mysterious sanctum that his new book explores, the French journalist Frédéric Martel writes that “even in San Francisco’s Castro” there aren’t “quite as many gays.”

He’s talking about the Vatican. And he’s delivering a bombshell.

Although the book’s publishers have kept it under tight wraps, I obtained a copy in advance of its release next Thursday. It will come out in eight languages and 20 countries, under the title “Sodoma,” as in Sodom, in Western Europe and “In the Closet of the Vatican” in the United States, Britain and Canada.

It includes the claim that about 80 percent of the male Roman Catholic clergy who work at the Vatican, around the pope, are gay. It contends that the more showily homophobic a Vatican official is, the more likely he belongs to that crowd, and that the higher up the chain of command you go, the more gays you find. And not all of them are celibate. Not by a long shot.

I’m supposed to cheer, right? I’m an openly gay man. I’m a sometime church critic. Hooray for the exposure of hypocrisy in high places and the affirmation that some of our tormentors have tortured motives. Thank heaven for the challenge to their moral authority. Let the sun in. Let the truth out.

But I’m bothered and even a little scared. Whatever Martel’s intent, “In the Closet of the Vatican” may be less a constructive reckoning than a stockpile of ammunition for militant right-wing Catholics who already itch to conduct a witch hunt for gay priests, many of whom are exemplary — and chaste — servants of the church. Those same Catholics oppose sensible and necessary reforms, and will point to the book’s revelations as proof that the church is already too permissive and has lost its dignity and its way.

Although Martel himself is openly gay, he sensationalizes gayness by devoting his inquiry to Catholic officials who have had sex with men, not ones who have had sex with women. The promise of celibacy that priests make forbids all sexual partners, and what violates Catholic teaching isn’t just gay sex but sex outside marriage. In that context, Martel’s focus on homosexuality buys into the notion that it’s especially troubling and titillating.

His tone doesn’t help. “The world I am discovering, with its 50 shades of gay, is beyond comprehension,” he writes. It will seem to some readers “a fairy tale.” He challenges the conventional wisdom that Pope Francis, who has detractors all around him, is “among the wolves,” clarifying, “It’s not quite true: he’s among the queens.” Maybe it’s better in the original French, but this language is at once profoundly silly and deeply offensive.

The sourcing of much of “In the Closet of the Vatican” is vague, and other Vatican experts told me that the 80 percent figure is neither knowable nor credible.

“It’s not a scientifically based accusation — it’s an ideologically based one,” said the Rev. Thomas Reese, a columnist for The National Catholic Reporter who visits the Vatican frequently and has written several highly regarded books about the Roman Catholic hierarchy. “One of the problems is that Catholic bishops have never allowed any kind of research in this area. They don’t want to know how many gay priests there are.” Independent studies put the percentage of gay men among Catholic priests in the United States at 15 percent to 60 percent.

In a telephone interview on Thursday, Martel stressed that the 80 percent isn’t his estimate but that of a former priest at the Vatican whom he quotes by name in the book. But he presents that quotation without sufficient skepticism and, in his own words, writes, “It’s a big majority.”

He says that “In the Closet of the Vatican” is informed by about 1,500 interviews over four years and the contributions of scores of researchers and other assistants. I covered the Vatican for The Times for nearly two years, and the book has a richness of detail that’s persuasive. It’s going to be widely discussed and hotly debated.

It depicts different sexual subcultures, including clandestine meetings between Vatican officials and young heterosexual Muslim men in Rome who work as prostitutes. It names names, and while many belong to Vatican officials and other priests who are dead or whose sexual identities have come under public scrutiny before, Martel also lavishes considerable energy on the suggestion that Francis’ predecessor, Pope Benedict XVI, and other towering figures in the church are gay.

Perhaps the most vivid of the double lives under Martel’s gaze is that of Cardinal Alfonso López Trujillo of Colombia, who died a little over a decade ago. According to the book, he prowled the ranks of seminarians and young priests for men to seduce and routinely hired male prostitutes, sometimes beating them up after sex. All the while he promoted the church’s teaching that all gay men are “objectively disordered” and embraced its ban on priests who are believed to have “deep-seated homosexual tendencies,” whether they act on them or not.

Part of my concern about the book is the timing of its release, which coincides precisely with an unprecedented meeting at the Vatican about sexual abuse in the church. For the first time, the pope has summoned the presidents of every Catholic bishops conference around the world to discuss this topic alone. But the book “is also bound to shift attention away from child abuse and onto gay priests in general, once again falsely conflating in people’s minds homosexuality and pedophilia,” said the Rev. James Martin, a best-selling Jesuit author, in a recent tweet. He’s right.

The book doesn’t equate them, and in fact makes the different, important point that the church’s culture of secrecy — a culture created in part by gay priests’ need to conceal who they are — works against the exposure of molesters who are guilty of crimes.

As David Clohessy, a longtime advocate for survivors of sexual abuse by priests, said to me on the phone a few days ago: “Many priests have a huge disincentive to report sexual misdeeds by colleagues. They know they’re vulnerable to being blackballed. It’s celibacy and the secretive, rigid, ancient all-male hierarchy that contributes to the cover-up and, therefore, more abuse.” Abuse has no sexual orientation, a fact made clear by many cases of priests having sex with girls and adult women, including nuns, whose victimization by priests was publicly acknowledged by Pope Francis for the first time early this month.

But that’s a crucial subtlety that’s too easily lost in the thicket of exclamation points in “In the Closet of the Vatican.” And more people will read the racy headlines about the book than the book itself. What they may take away is this: Catholic priests are twisted characters. And gay men are creatures of stealth and agents of deception who band together in eccentric societies with odd rituals.

I asked Martel what his aim was. “I’m a journalist,” he said. “My only goal is to write stories. I’m not a Catholic. I don’t have any motive of revenge. My concern is not that the church will be better or worse. I’m outside of the church.”

I asked him if he worried about homophobes weaponizing the book. If they read it correctly, he answered, they’ll realize that rooting out gays would mean ridding the church of some of their heroes, who inveigh against homosexuality as a way of denying and camouflaging who they really are. The cardinals most accepting of gays, he said, are those who are probably straight.

All else aside, the book speaks to the enormous and seemingly growing tension between a church that frequently vilifies and marginalizes gay men and a priesthood dense with them. “This fact hangs in the air as a giant, unsustainable paradox,” wrote Andrew Sullivan, who is Catholic and gay, in an excellent cover story for New York magazine last month. It explains why so many gay men entered the priesthood, especially decades ago: They didn’t feel safe or comfortable in a society that ostracized them. Their sense of being outsiders gave them a more spiritual bent and greater desire to help others in need.

They weren’t pulling off some elaborate ruse or looking for the clerical equivalent of a bathhouse. They were trying, psychologically and emotionally, to survive. Many still are, and I fear that “In the Closet of the Vatican” won’t help.